Buchhandlung » The Land of the White Elephant, Frank Vincent 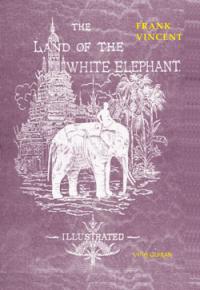 WE, whose good fortune it is to live in the nineteenth century, are accustomed to boast of the perfection and pre-eminence of our modern civilisation, of the grandeur of our attainments in Science, Art, Literature, and what not, as compared with those whom we call ancients? but still we are compelled to admit that they have far excelled our recent endeavours in many things, and notably in the Fine Arts of painting, architecture, and sculpture. We were but just looking upon a most wonderful example of the two latter, for in style and beauty of architecture, solidity of construction, and magnificent and elaborate carving and sculpture, the great Nagkon Wat has no superior, certainly no rival, standing at the present day. The first view of the ruins is almost overwhelming. One writer says, ' The ruins of Angkor are as imposing as the ruins of Thebes or Memphis, and more mysterious ?' and another — M. Mouhot — whose work we have used as a guide-book in this distant part of Siam — thinks that ' one of these temples [Nagkon Wat] — a rival to that of Solomon, and erected by some ancient Michael Angelo — mighttake an honourable place beside our most beautiful buildings. It is grander than anything left to us by Greece or Rome.' At a first sight one is most impressed with the magnitude, minute detail, high finish, and elegant proportions of this temple, and then to the bewildered beholder arise mysterious after-thoughts — who built it ? when was it built ? and where now are its builders? But it is doubtful if these questions will ever be answered. There exist no credible traditions — all is absurd fable or legend.

Frank Vincent was born in Brooklyn, NY on April 2, 1848. Having finished his studies in 1875 he started travelling arround the world for fifteen years including explorations of not only South East Asia but also countries like Lapland, Brazil and the Congo Free State. Being a man who combined cultural taste and catholic interests with adventurous and observant capabilities he became an accomplished writer. His travel books covered four continents, ‘The Land of the White Elephant’, his first book, is one of the liveliest and most readable accounts of nineteenth century travelling. Only thirteen years before in 1862 Henri Mouhut indroduced the rediscovered Angkor site to the Western world, thus directing a spotlight to the culture of South East Asia. Frank Vincent presented a valuable collection of Indo-Chinese antiquities and art and industrial objects to the Metropolitan Museum of Art and became a New York honorary member of numerous scientific and literature societies in the United States, and abroad. He also received nine decorations from foreign sovereigns and goverments. On June 3, 1909 he married Harriet Stillman. Frank Vincent died in 1916. He published ‘The Land of the White Elephant’ 1874? ‘Through and Through the Tropics’ 1876? ‘Two Months in Burmah’ 1877? ‘The Wonderful Ruins of Cambodia’ 1878? ‘Norsk, Lapp, Finn’ 1881? ‘Around and About South America’ 1888? ‘The Republics of South America’ 1889 and ‘Actual Africa’ 1895. 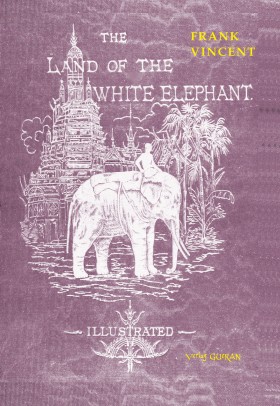